On March 24, 2021, the House of Commons voted unanimously to officially designate August 1 Emancipation Day. It marks the actual day in 1834 that the Slavery Abolition Act of 1833 came into effect across the British Empire.
Canadians are not always aware that Black and Indigenous Peoples were once enslaved on the land that is now Canada. Those who fought enslavement were pivotal in shaping our society to be as diverse as it is today.
Therefore, each August 1, Canadians are invited to reflect, educate and engage in the ongoing fight against anti-Black racism and discrimination.
Emancipation Day celebrates the strength and perseverance of Black communities in Canada.
​
Source:  Emancipation Day — August 1 - Canada.ca

The Journey by Israel A. Crooks

​"The Journey" tells a story. The central figure, the "Freedom Goddess/Angel" represents the personification of the Hamilton Black Community's journey from Emancipation (abolition of slavery) to Liberation (end of systemic and institutionalized racism and oppression). You will notice that the journey is winding, uphill and strategic (as represented by the two black squares under her feet, and a nod to my favourite game: chess). Her earrings are the scales of justice, and her sceptre forms an Ankh with "BLM" engraved into it. On her wings are who I call "The 12 Champions of Liberation"; Hamiltonians who have/continue to lead the charge towards liberation. They are from top left to top right:


Anchoring the journey is the mecca of spiritual refuge for Hamilton's Black Community, Stewart Memorial Church. Since Hamilton is known worldwide as "The City of Waterfalls", I wanted to pay homage to that by including Webster's Falls. The lantern that lights her journey is a nod to the Underground Railroad. The piece was lit with a pre-dawn sky, symbolizing that although the darkness of slavery is behind us, much work still remains before we can see the full light of day.

"The Thankful Youth" complete the piece, representing the present and future generations that will benefit from this journey. 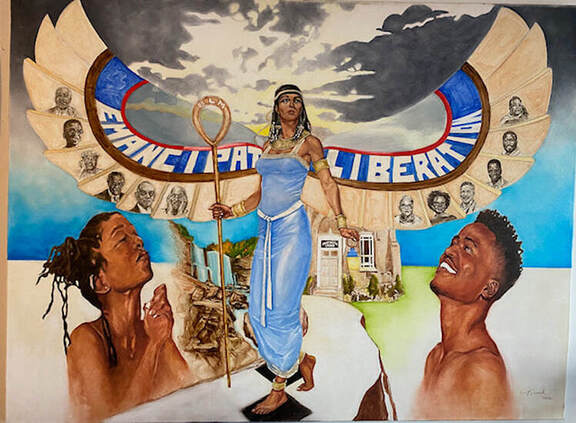 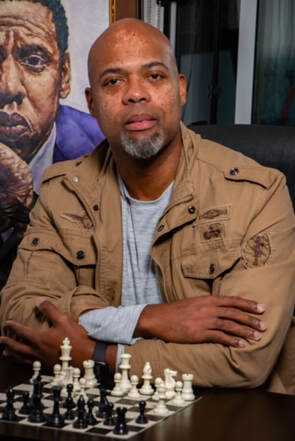