It’s an Indigenous and colourful addition to Concession Street.
The Seven Grandfather Teachings by Hamilton artist Kyle Joedicke can be found along the wall at 576 Concession, across the street from the public library.
“This is probably one of the most fun projects I’ve been able to work on,” said the 29-year-old Joedicke, who works in construction during the day. “I’m educating myself about the teachings as I’m painting it and I’ve also been given the opportunity to teach the community at large about it as well.”
The mural features images of seven animals that reflect the oral history and traditions that Indigenous elders have passed down through stories and ceremonies.
The turtle represents truth, the wolf carries humility, the beaver offers wisdom, the sabe or sasquatch represents honesty, the bear carries courage, the buffalo provides the gift of respect and the eagle is love.
“It’s somewhat of a universal set of teachings across North America for all tribes and clans, but the one I’m specifically taking on representing is from the Haudenosaunee culture, which is my own background,” he said.
For Joedicke, the mural was as much a learning experience for him as he is hoping it will be for the Concession Street community.
Originally from Caledonia, Joedicke said he grew up in the home of a white single mother of Scottish descent while his father was a Cayuga and Turtle Clan member from the nearby Six Nations of the Grand River.

He has been using his art to reconnect with his Indigenous heritage.
“That struggle for identity is ongoing,” he said. “I’m trying to tell my story through the images.”
While his spray-painting techniques are pretty much self-taught, Joedicke said he has been influenced by Haida art from the west coast and by the works of Indigenous artist Norval Morrisseau.
“That was something that really spoke to me,” he said. “The vivid colours of the art and the presentation itself was extremely striking.”
He began painting the mural on Sept. 14, working on Saturdays, late afternoons and early evenings.
Joedicke figures he used at least three dozen cans of spray paint.
His next project will be to paint over the “pizza guy” at the end of the wall near Concession Street.
“I think I’m going to put in a tree-of-life sort of a figure,” Joedicke said. “That’s where the story begins.”
He was hired to do the mural by the Concession Street Business Improvement Area (BIA).
“It’s important for us to tell Indigenous stories,” said BIA executive director Cristina Geissler. “We are very proud to include this important piece of artwork into our community. This mural tells a meaningful story about Indigenous culture and we are honoured to give local Haudenosaunee artist Kyle this canvas right here on Concession Street. 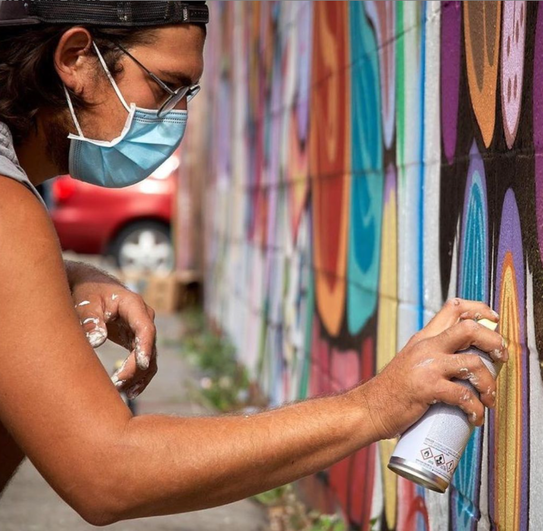